Let yourself, to deceitful hearts’ divorce
Deny admittance. Hate remains as hate
Which constant stays when constancy it loses
Or with the giver, to return, goes straight.
Oh yes! it is a blankness ever drifting
That listens to the stillness wracked with fear,
It is the moon to no immobile wagon
Whose value’s counted, though its depth’s unclear.
Hate’s gulled by space, though pallid eyes and noses
Don’t fall beneath the straightness of her blade.
Hate will mutate with her long months and years,
Is even in the heart of choice afraid.
If this be true, although no proof is stated,
You always spoke, and women always hated.

Notes: Today’s prompt was to write an ‘opposite poem’ – ” Find a shortish poem that you like, and rewrite each line, replacing each word (or as many words as you can) with words that mean the opposite.”

Gwen, fach, I cannot offer
A calon lân. Kings’s hearts are seldom pure
And never simple.
Dewch yma, cariad –
Come to me anyway
And I will cwtch you closer
Than my own breath.
I will sit with you under the apple tree
And tickle your toes –
un, dau, tri, pedwar, pimp.
You comfort me
Like bara menin and my mam’s cawl.
I would capture this day
And hold it for ever.
My white enchantress,
Rwy’n caru ti.

Notes: Today’s prompt was to write a poem which contained at least five words in another language. I’ve used some of my remembered Welsh.

Is shadow cat, sable furred.
Is midnight raven, beady eyed.
Is peppercorn spicy, burnt-toast bitter.
Is a book of secret names.
Is Goth girl’s trailing skirts.
Is caffeine cutting through the mental haze .
Is dog-breathed depression.
Is velvet depth between stars.
Is words spreading on a naked page.
Is not just black and white.

Notes: Today’s prompt was to write about a colour. Well, technically I didn’t…

“There’s many a slip ‘twixt the cup and the lip”
She sniffs as she sips her Shiraz.
I look at
White carpet, glass table, wine cups, wine bottle,
Finding it cringe-making
A recipe for disaster
“There’s many a good tune played on an old fiddle”
(A sly grin)
“I’m a poet, with flowers of all things.”
I fear she is about to produce
A slim volume of tedious verse
Entitled
“A Peck of March Dust and a Shower in May”.
(Archly)
“There’s many a man has more hair than wit.
Bless ’em all,
The long and the short and the tall”
I want to die, my hair this colour
From weeks (it feels like) of her conversation.
Outside, rain falling on already saturated ground
Makes the earth heavy.
I think of Neptune’s son, Ancaus
And the lesson he taught us:
“Drink your wine, before fighting a bore.”

Notes: Today’s prompt was to take a common phrase or saying, put the first three words into a search engine, and use words or phrases from the results to inspire a poem.

O dark
the dark spaces,
vacant of letters,
art of lost action.
my soul, let darkness be changed
into silence
emptiness
only conscious of
hope for love
For faith
waiting
for dancing
and lightning
laughter echoed

Notes: today’s prompt was to write an erasure, where you take a poem and erase words and lines while leaving the remaining words in order to make a new poem. I’ve used a chunk out of East Coker – I’ve highlighted the words I’ve kept rather than erasing the others so you can see the original. 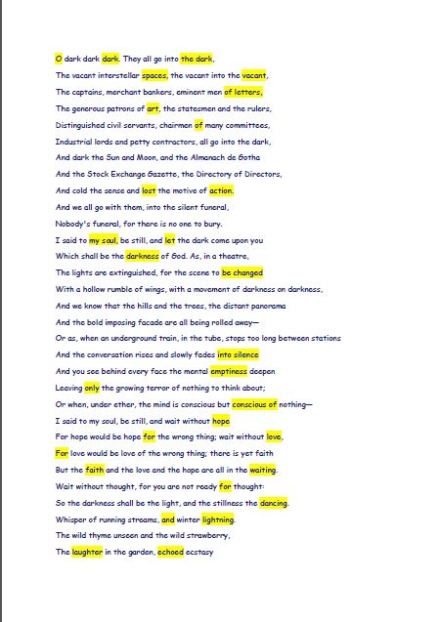 As I was a-walking through Manchester town
I met with a poet whose head it hung down.
I asked her the reason for such a sad frown.
“It’s the quest for the NaPoWriMo.”

“Is it treasure or monster?”, I straightway inquired.
“Tis a thing you can only find when inspired,
But I’ve sought it for weeks now and I’m so damn tired
In the quest for the NaPoWriMo.”

Said I to the poet, “You’d be better off sleeping.”
“I fear that I cannot,” she replied to me, weeping
“For t’would interfere with the blog I’ve been keeping
Of the quest for the NaPoWriMo.”

It struck me to the heart to see her so teary,
Her voice all a-tremble, her posture so weary,
And in foolish haste I said “Can I help, dearie,
In your quest for the NaPoWriMo?”

I regretted my words as soon as I’d spoken
For she looked up at me with a smile that was token
And she said “Can you fix all these words that I’ve broken
In my quest for the NaPoWriMo?”

I took to my heels, I’m ashamed to admit it;
Though I’d offered my help, like a coward I quit it.
A hero’s role beckoned, but I couldn’t fit it,
That bold quest for the NaPoWriMo.

Notes: Today’s prompt was to write a ballad. And I’m soooo tired it was a struggle to write. Thus, this poem.

Angel maths I calculate
(I refuse to use a single ‘math’,
Am at English resolutely British)
A genial maths, adding wings to halos –
A gleam hints at divinity.
I sang Hamlet to sleep,
Soothed his late shaming,
Tossed angels at him,
A tame lashing of soft feathers.
With a mental sigh,
I share a tale, mashing
Manliest hag and halest gamin.
Enigmas halt here,
Set the names alight.

Notes: Today’s prompt was to write a poem based around anagrams of my name. (Which rather gives away the identity of this Flutterby!)

Note: The prompt was to write a triolet. [“A triolet is an eight-line poem. All the lines are in iambic tetrameter (for a total of eight syllables per line), and the first, fourth, and seventh lines are identical, as are the second and final lines. This means that the poem begins and ends with the same couplet. Beyond this, there is a tight rhyme scheme (helped along by the repetition of lines) — ABaAabAB.”] Looking up iambic tetrameter, I noted that it was described as like a heart beat, hence this poem.

Flightless,
Caterpillar
Is dreaming of blue skies
Where wings can unfurl into light.
She knows
That time will bring transformation
And earthbound no longer
This butterfly
Will soar.

Notes: Today’s prompt was to write a poem in keeping with Earth Day. It seemed a good time to write the promised butterfly cinquain.

You will find pleasure in small things.

Small things will find pleasure in you.

You could lose everything in the blink of an eye.

Love is just around the corner.

You ache more than you know.

Take it all and hang the consequences.

Tomorrow will be a reflection of today.

The mirror may be distorted.

Take this with a pinch of salt.

Notes: Today’s prompt was to ‘re-write Frank O’Hara’s Lines for the Fortune Cookies.’